#KeepThemRuby, analysis of a crowdfunding campaign

On 16 November, 2016, the Smithsonian successfully ended the crowdfunding campaign #KeepThemRuby to conserve the slippers that the actor Judy Garland wore in the film The Wizard of Oz (MGM, Dir. Victor Fleming, 1939). Using the platform Kickstarter (the American crowdfunding platform devoted to funding creative projects), they managed to raise the $300,000 necessary – in just one week!

Given that the campaign lasted a month, on the remaining days they extended the goal, with an additional $85,000 to also restore the Scarecrow’s costume. This second goal was not achieved and the campaign closed with $349,026.

In this post I analyze the campaign and the dangers of extending the goal of a crowdfunding campaign.

What is the Smithsonian?

The Smithsonian is the most important American cultural and educational institution, with a complex of 19 national museums — with free entrance —, a zoo and nine research centres, most of which are in Washington D.C. The Smithsonian is managed with federal funds, which cover the conservation of its collections — with some 136 million objects —, the maintenance of the buildings and the staff expenses. The institution also has to resort to private support to attend to other priorities, such as the educational programmes, temporary exhibitions and the restoration of some works of art.

This is the second campaign launched by the Smithsonian through Kickstarter. In 2015, the National Air and Space Museum already obtained over $700,000 to restore the spacesuit worn by the astronaut Neil Armstrong when he stepped onto the moon in 1969. The initial goal of #RebootTheSuit was $500,000, which were raised in just four days. They also extended the goal on that occasion, with $200,000 to restore the suit worn by Alan Shepard in 1961 during the first sub-orbital spaceflight on board the Mercury 3. The campaign closed with $719,779 (140% more than the initial goal) and 9,477 donors.

The Wizard of Oz is one of the most well-liked films in the United States. So much so that there is no Halloween without girls dressed as Dorothy and fathers disguised as the Scarecrow or the Tin Man. It is not therefore surprising that Dorothy’s ruby slippers are one of the most popular treasures of the National Museum of American History, where they are conserved as a relic of Hollywood’s golden age. These slippers, which only needed Dorothy to click her heels together three times to send her home while repeating the famous phrase “There’s no place like home…”, won a privileged place in the sentimental heritage of a country which considers them a national icon.

In 1939, Metro-Goldwyn-Mayer’s art department bought some conventional slippers, dyed them red and added a net onto which 2,400 ruby-coloured sequins were sewn which jumped up and down as Judy Garland danced down the yellow brick road. The production obviously had to be quick and cheap, since the objective was not for them to last longer than the shoot. Once The Wizard of Oz had been recorded, the slippers were left in a prop warehouse of the Hollywood studios until they were auctioned in 1970. An anonymous collector bought them for $15,000 and, nine years later, donated them to the Smithsonian, which deposited them in the National Museum of American History, where there have been admired by millions of visitors for more than 30 years.

The aura of the slippers does, however, go beyond their appearance. The ruby slippers represent the classical triumph of David over Goliath: that of a young female orphan from a Kansas farm who obtains the slippers from the dictatorial Wicked Witch of the West, cleverly using them to free the oppressed people of Oz. Ultimately, Dorothy’s slippers are also a symbol of revolution and hope which has led to numerous socio-political readings.

The goal of #KeepThemRuby was not to return the original shine to the slippers, but rather to stop the process of degradation due to the passing of time

Returning to the campaign, the goal of #KeepThemRuby was not to return the original shine to the slippers, but rather to stop the process of degradation due to the passing of time (and to the coexistence of 12 different materials), and to build a state-of-the-art temperature-controlled display case to ensure their conservation for at least another 80 years. Moreover, part of the urgency of the case lies in the fact that Dorothy’s slippers are to be one of the attractions of the exhibition “American Stories” that the National Museum of American History is preparing for 2018.

Evolution of the campaign and data

The donations ranged from $1 to $10,000. In the following table, I summarize the scale of donations and rewards (from receiving a simple e-mail of thanks to seeing your name on the donor wall, and including bags, T-shirts – and even replica slippers!), as well as the number of sponsors attracted by each section of the campaign: 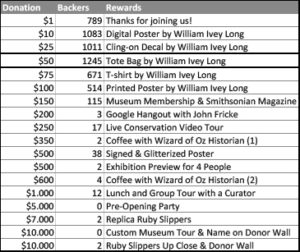 Successes of the campaign

Failings of the campaign

Despite its negative aspects, I believe that raising $300,000 to restore some slippers was a breathtaking goal and that #KeepThemRuby was an undoubted success. Among other things, the campaign brought:

This article was originally posted on LinkedIn on January 30th, 2017.

Teenagers in museums: the missing link?

Next
This site requires cookies. They are used to analyze the data to determine how to optimize this site and provide you with a better experience. We promise it won’t bother you! Do you accept?
YES NO