A case of social impact in the world of art

After visiting the LACMA (Los Angeles County Museum of Art) for the first time my daughter, who was then four years old, insisted several times: “Why are we leaving? I want to come again tomorrow. When will we come back?” My intuition told me that something was happening. I recapitulated. What had we done differently in the LACMA that we did not do in other museums? And I began to investigate and to ask.

In this post, in the preparation of which I had the opportunity to chat with Karen Satzman, director of the LACMA’s Youth and Family Education Programs, I analyze what the Arts for NexGen programme consists of — or how the LACMA has become, in just over a decade, a valuable resource for many Los Angeles families —, as well as the results of its first social impact evaluation.

The LACMA is the biggest art museum on the US west coast. Since its creation in 1965, the museum has been devoted to conserving, disseminating and expanding an encyclopaedic collection of more than 130,000 art objects which present various cultures of the world from antiquity to the present day. Since 2006, its director has been Michael Govan, former director of the Dia Art Foundation in New York, who has brought the museum international renown and is currently working on an ambitious and controversial expansion project.

The museum’s health has not always been this good. Andrea L. Rich, who was in charge of the LACMA just before Govan (1995-2005), was the person who turned the institution round after years without leadership. Coming from the UCLA (University of California, Los Angeles), of which she was an administrator, Rich made radical changes to the way in which the museum operated and gave the institution a new focus [1][1] Los Angeles Times Interview, "Andrea Rich. Educating the Next Generation of Art Lovers", 26 October 1997. One of the things that she did was to change the museum’s mission in order to also include its duty to create meaningful educational, aesthetic, intellectual, and cultural experiences for the widest array of audiences. The museum had lost its focus and needed to connect with its community and become meaningful again.

Within this framework, she commissioned the Arts for NexGen project, which took shape in 2003.

The aim of Arts for NexGen was to make the museum more accessible to young people and families, strengthening their sense of belonging and connection to LACMA and opening the museum’s doors to a community with greater social diversity. For this, Andrea L. Rich got the Education, Membership (members’ programme or friends of the museum) and Marketing departments working together. 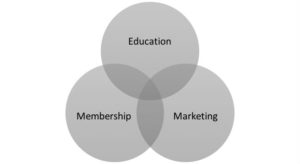 Thanks to this interdepartmental work, an essential prerequisite to achieve the objective was identified: removing the financial barrier to visiting the museum.

Starting from this clear prior condition, a strategic intervention was undertaken, creating a category of free museum membership for all young people under 17 years old. Furthermore (and this is one of the keys to its success!), NexGen allowed each NexGen member to bring an accompanying adult free of charge, whether a member of the family, a friend, the childminder, a neighbour…

It is obvious why they launched this action in the framework of membership: it was a question of emphasizing that they belonged to the museum and to make them feel part of it from the first day.

They moreover brought together, under the same “NexGen umbrella”, all of the educational programmes (both pre-existing and new, free or with a very low cost), highlighting the value of creating personal connections with art through three basic pillars: looking at art, talking about art and making art.

Arts for NexGen, which attracts between 10,000 and 12,000 new members each year, closed 2016 with 234,016 members. Although it is true that the programme’s objective is not the quantity but rather the quality of its proposals, I made a calculation and discovered that the figure is equivalent to 8% of the population under 18 years old in Los Angeles County [2][2] US Census.

On that September morning when we visited the LACMA we did not see many of the museum’s rooms; only what was possible given the pace of two young children two and four years old. We were, however, almost an hour in the Boone Children’s Gallery, the jewel in the crown of NexGen.

There, volunteers invited us to sit at communal tables, gave us paper and brushes, showed us the pigments that we could use and we began to paint together, children and adults. It was not just somewhere to leave the children; it was something else. Painting led us to concentration, to silence, but also to talking about what was happening: about colours and shapes, but also about why a rainbow appears or about the different ways of interpreting reality, without forgetting the fascination caused by the wonderful dragon drawn by the teenager sitting next to us.

It was a relaxing moment which we had not planned and which no one in charge of the room was in a hurry to end. Quality time was one of the best allies; you could leave after 10 minutes or spend the whole morning there.

Another asset was when it came to choosing whether to leave the drawings hanging in the museum gallery or to take them home with us. In a certain way, the possibility of hanging them in the museum dignified our productions and gave them validity, placing them on the same level as the Matisse that we had glimpsed earlier. Maybe because it was a unique, different and valuable experience for the whole family, we chose the second option, and the drawings that we did that day occupy a privileged position on the walls of our house.

The Boone Children’s Gallery is the star proposal of Arts for NexGen, as certified by its user figures (over 100,000 in 2016!) The range of activities is broader than that, though, and from among the other NexGen programmes I was struck by the collaboration grants for young high school children. Each year, some 15 young children receive a small stipend to come to the museum each Friday afternoon. There, they receive training to give guided tours to other teens and collaborate with the organization of After Dark, a night for teens which they had to limit to 2,500 participants because in previous editions it got out of hand. Unheard-of.

In the following table I briefly summarize the NexGen programmes, together with the number of users in 2016, provided by the LACMA: 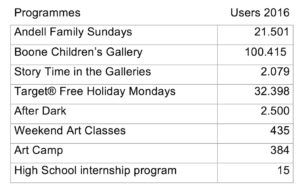 Measurement of its social impact

The LACMA’s commitment to change the perception of the museum — from an elitist, academic and privileged place to a space suitable for other types of learning —, began with the determination of Andrea L. Rich and continued under the current leadership which, in 2009, commissioned an initial evaluation to measure the social impact of Arts for NexGen. The LACMA’s educators worked for a whole year (June 2009 – May 2010) with an independent consultancy firm to evaluate the programme’s efficiency.

There were at least four objectives to evaluating and measuring this programme’s impact and demonstrating its value at the heart of the community:

Components of the evaluation

The social impacts of cultural projects are, in part, intangible impacts which it is complex to measure, since they are not quantifiable (personal enrichment, broadening of prospects, encouragement of creativity, development of a feeling of belonging and involvement in culture, pride and identity…). Even so, there is a certain consensus that the perception of their existence is the best way to verify them.

Taking these considerations into account, a mixture of quantitative and qualitative techniques was used:

“We love this program! It’s a wonderful way for us to share our excitement about art with our son. He enjoys it too, and we look forward to many years of coming here.”–  NexGen parents

You can consult the evaluation report here.

Since then, periodic surveys of the users of NexGen have been held and other measuring actions are planned for the future.

The blend of the different measuring methods allowed data to be collected on the impact that the programme is having on its members, and to see how the perceptions about the museum and the attitudes on the experiences that it provides are changing.

NexGen is a case which has managed to successfully launch the message that young people and families also belong to the museum. Families do not see the NexGen card as being exclusive for their children, but rather perceive it as membership for the whole family and see the LACMA as a lifelong resource for their children.

The result of the impact evaluation indicates that the LACMA has become important for a generation of museum visitors. It will be interesting to see how it affects the future, whether these young people will continue their relationship with the museum — as members or as parents on the same programme —, how the profession will be diversified in the LACMA itself, how it will influence other museums — its success has generated interest in many institutions — and cultural policies.

This article was originally posted on LinkedIn on March 31st, 2017.